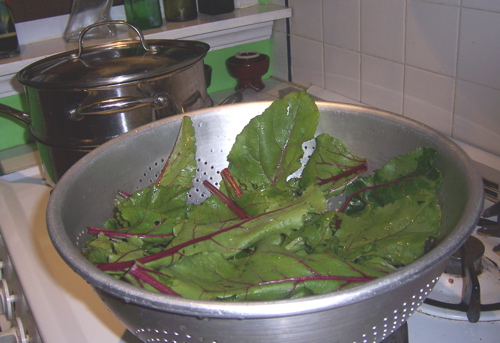 Steaming beet greens. They are good and good for you. You freaking heard me!

Last winter, Pete discovered that beets, his scheming mortal enemy through his childhood, were actually just an accountant named Murray who may never have had superpowers and kind of has an interesting car. I jarred beets because I need the B Vitamins. I opened a jar because it was dinnertime. Pete poked the lurid purple things on his plate, then mustered the courage to take a bite. He didn’t hate it and took another bite. Next thing you know, we’re having beet salads with dinner and I don’t feel like roadkill. That means now that beets have appeared in the farmers market, it’s time to get them into jars. Further: it’s time to steam greens for summer soups.

In an interesting turn of events, the F key on my laptop barely works. I suppose it’s from friction but it’s a ucking drag.