I like this food writer’s style. At the farmers market on Friday, we found beautiful tomato peppers, which I’d never seen before, enthusiastically described by the farmer as being the inspired pet project of her elderly Hungarian friend. This morning, I read the recipe several times and thought I could do it. 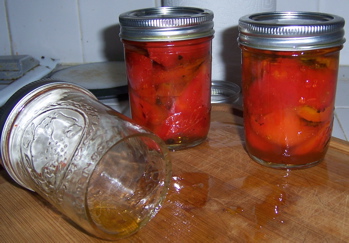 I was right! After I roasted the peppers, the brining, salting and packing was a breeze. I loved this recipe until I dropped three 8 oz. jars into hot water for processing and heard a loud CRACK! The bottom of one jar cracked cleanly, and as I lifted the top of the jar, peppers slid out the bottom. I cleaned out the pot, boiled more water and processed it for 10 minutes. Despite the pepper explosion, this recipe was so easy I plan to pick up a case of peppers and jar them this weekend. This was a really exciting project.

Hardly exciting: last night, Daria whispered in my ear that yesterday’s Trentonian published a picture of Poppy’s father and his girlfriend lying dead on the road with his boots sticking out from under a tarp. Today’s coverage is somewhat more respectful and less barbaric. In another turn of unbelievable events: today is Poppy’s birthday, and most of her Facebook friends don’t know. Oh the places people will go when they don’t know where we are.

Last night, Pete and my niece Lois prepped food for a party the family’s throwing tonight for my mother’s birthday. After three hours of slicing, peeling and chopping, Pete washed his hands and took out the compost.

We went out for a look.

Pete: This is not your couch?
Tata: No, it is not my couch, but if a mysterious couch were actually a gift from God, this would be the couch God would have delivered.
Pete: What?
Tata: Because this is chaise longue in a miniature leopard print.
Lois: This is like the perfect thing, isn’t it?
Tata: Well, for my current living room it should be zebra, but THERE IS A COUCH IN THE BACKYARD.
Pete: I’ll call the tenants and ask if they know anything about it.

Pete walked away and started dialing. I grabbed one end and lifted up the couch too easily for it to be expensive.

Tata: Or maybe it’s IKEA. That would be good news for ME.
Pete: Jane says it was at her ex-boyfriend’s house and it wasn’t cheap.
Tata: No, of course not, but a couple of nights outside and it’ll be trash. We can’t leave it here. It looks lonely!
Pete: We’ll keep it next to the garage, but we’re not bringing it inside and we’re definitely not feeding it.

A free-range couch. Rare in these parts.

In other, preposterous news: the father of Poppy, married last weekend to my cousin Tony, was killed last night in a motorcycle accident. If you saw it in a movie you’d get up and walk out. 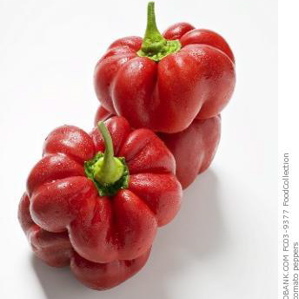 Johnny’s doing a greatest hits tour of our pop music lives. This whistle stop nearly caused me to swallow my tongue.

Millie: Did anyone tell you what happened on Friday?
Tata: No.
Millie: No one knew where you were.
Tata: What? I had a wedding. Everyone knew about it.
Millie: No one knew a thing, but no one noticed you weren’t here until the afternoon. Everyone asked everyone, “Have you seen her?” and no one had. Finally, Gianna called Lupe at home and Lupe knew you were at a wedding.
Tata: I told you all about it. Don’t you remember how miserable I was?
Millie: You never said a word.
Tata: What are you talking about? I complained for months!
Millie: Nope.
Tata: Honest to God, my whole life needs subtitles.

We sat in this room for less than fifteen minutes.

Millie: So what happened?
Tata: Pete and I and my niece Lois drove down to the Tintin Falls Holiday Inn, where we met up with my sister Daria and her husband Tyler and our baby sister Dara and her new boyfriend Josh who looks just like Justin Bieber so all evening I kept asking, “What’s Justin’s name again?” That doesn’t go over as well as you might think.
Millie: I bet it doesn’t!
Tata: We got dressed in a room the size of prison cell and drove over to this barn on the beach at Long Branch, which is so corporate we checked the ocean for sponsors. The wedding took about fifteen minutes in a room overlooking the ocean that was set up for another wedding. I don’t know what we were doing there. Anyway, minutes later, we piled into cars and drove four miles back to the Holiday Inn. It was about 90 degrees, my AC’s broken and Route 36 was wall-to-wall construction, rush hour and shore traffic, so the ride took almost an hour, by which time my hair was a foot high. I pinned it down with a barrette but I looked like the Contadina lady’s mother-in-law in kitten heels.

Meet Daria, the sister sixteen months younger than me.

Millie: I’m sure you looked fine.
Tata: I looked awful, but that’s not important. Daria has been very depressed, so at the cocktail hour, where we all dove face-first into gin & tonics, and we were joined by my Fabulous Ex-Husband and his current wife Karen, which could be traumatic except we love them. But there was this lull in the conversation and I picked up the camera and took pictures of myself. Daria said, “What are you doing?” I said, “I went to a wedding and had a great time. See? Here I am at the cocktail hour and here I am eating stuffed shells. There were other people at the wedding but they were in my way.” She was in a better mood after that.
Millie: How was the food?
Tata: It was okay, but that’s not important either. I can’t explain that. Anyway, the reception room was so cold people wrapped themselves in tablecloths. A year later, we had dinner. I looked up from my plate and Karen was wearing her napkin like a schmatta. There’s photographic evidence of my laughing in a public place. The whole thing was an expensive, silly ordeal and I complained about it for months. I can’t believe all the noise in my head never made it past my lips. The happy couple got married before my cousin got deployed to Iraq and now they’re pregnant, and why did we do this? The prime rib? 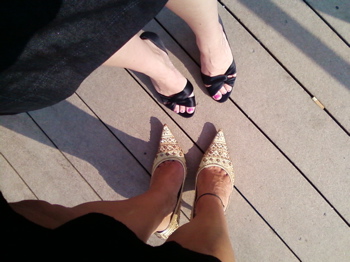 Millie: You never said a thing. I would have written your vacation day on the calendar.
Tata: It snowed formal wear! I wore two different pair of expensive, painful shoes!
Millie: You can keep a secret.
Tata: Nuh unh. Daria’s redecorating Facebook with photographic evidence as we speak.
Millie: That’s nice.
Tata: Yeah, she’s not good at crime. 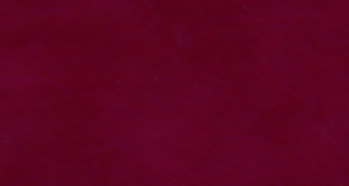 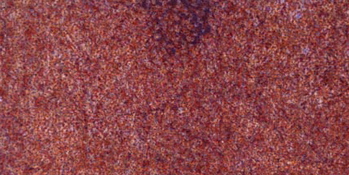 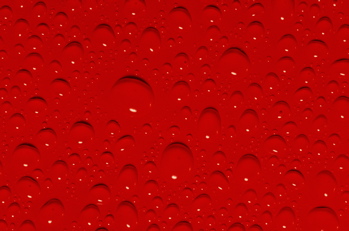 We’ve just returned from the Menlo Park Mall, where the Mac Store replaced my power cord without a fuss, and where Radio Shack had a whole wall of noise-canceling headphones that will prevent me from going postal on my chattiest co-workers during student training season. They’re lightweight and practically homicide-free!

And for you: a pretty face.

Lovely Sweetpea as a kitten peering through the darkness of the dining room.

Pete and I recently had a house guest from Los Angeles. After dinner, she made a beeline for the kitchen sink and the soapy dishpan I’d set up before we sat down. Washing up proved quick with everything in place, but I watched quietly from across the kitchen as she rinsed with even less water than I would have imagined possible. Ah, I thought, she lives in a desert. The rules are different. Then we got almost no rain for three weeks while, north and south of us, we saw Wrath of God storms speeding across weather maps. Lawns baked brown and trees lost their leaves. Bees get angry, and you just don’t want your bees angry.

The rain finally came, the view from the empty bedroom window.

I was raised by hippies and hairdressers, both of which cared about water conservation, though for different reasons. The former urged us kids to turn off the spigot because clean water is a finite commodity; the latter because water costs money, goddammit, and we are not made of money. I’m pretty careful with my resources, but not perfect. We use a rain barrel but could use three or four more. We are accustomed to water falling out of the sky every three or four days. When it stopped, we felt shitty and when it started again, better. I’ve been sick for two days and couldn’t get out of bed until 10 this morning. A full day of gentle rain? Bring it.

The world is full of missing things for which someone once searched.

All of this is to say the rain caused me to look out the empty bedroom window. In June, I sat in the backyard, pitting cherries with an old plastic cherry pitter when – THWACK! – the pieces in my hands flew apart and the spring disappeared. The cherry pitter recently disintegrated in my hands a final time and I threw away little pieces of a former kitchen gadget. A paring knife turns out to pit faster anyhow, and we find so few of those on the roof. 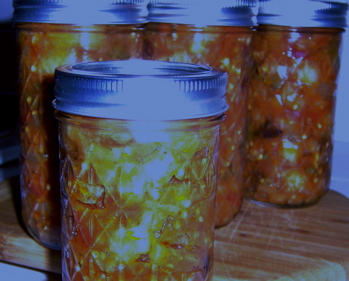 Caponata photographed like it went to Julliard and was once in a Toni Basil video.

This morning, I simmered and jarred caponata, which is an eggplant salad unique to Sicily and the Italian foods aisle at your grocery store. You’ll find it next to the oil-cured olives, the pepperonata and the marinated artichoke hearts. If you still can’t find it, that’s because I got there first.

Last year was the first time I jarred this magical stuff. The first time I remember being aware of it was when Dad opened a prized jar of his private stash at Miss Sasha’s bridal shower and no I don’t know how this lapse in my culinary education was possible. Anyhoo, last winter I jarred it in 8 oz. jars; that’s fantastic lunch with a mess o’ Triscuits. Eight ounces of caponata is just the right amount for two sandwiches with melted Swiss. It’s not too much. It’s not too little. That’s why these babies here ate 12 oz. jars: because I enjoy playing with eggplanty fire.

From a glass balcony, Pete photographs the beach behind him and his wife, in another glass room, shushing no one.