My nephew comes to the house once a week to turn over the compost and do little jobs around the garden. I’d seen him walking down our street with an older guy and noted where they stopped, because even though this is a very small town an angry mob needs good directions. My nephew said this older guy is sponsoring him for Christian confirmation, but he, my nephew, is struggling with the concept of faith. His entire family goes to church every Sunday with sincerity and sheet music, so I waited patiently for him to say, “April Fool!”

We looked at each other.

We stood. Suddenly, I remembered I was the grownup, which was a little awkward.

The “African daisy” (Osteospermum app.) a half-hardy perennial native to southern Africa. It comes in many colors and is a popular bedding plant. Photographed at Longwood Gardens.
Photo: Bob Hosh

I said, “Faith is kind of weird. It comes and goes. What matters is what you do.”

He said something much more mature than I am about collecting principles for testimony, but I am not a Christian and these are not my rituals. I know less about this than he does and more than I want to.

I uttered some platitude about how behavior is most important. By this time, I was ushering him to the door, grinning like a jack o’ lantern in a wind storm. I did not say, “Kid, I’m always in your corner. Call me for tattoos and bail money.” He will never need it. 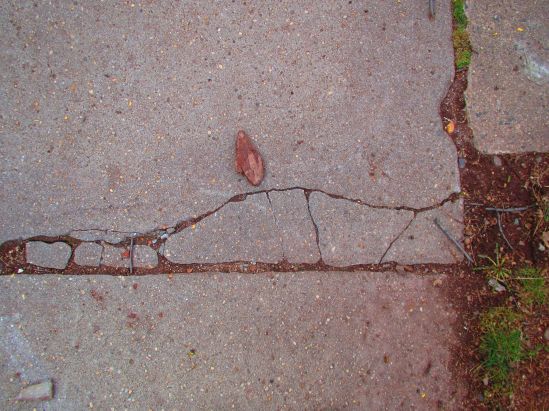 This wood chip plotted its escape from the yard, but did not get far.

Are you registered to vote? Because you and your vote are needed in this participatory democracy. Never let yourself believe your vote doesn’t matter.

Any weather forecast including snow should come with sooooothing pictures reminding us of the summer to come.

If your vote didn’t matter, herds of people wouldn’t be throwing buckets of money into convincing you to stay home. Please vote in every election, no matter how local.