At first, the Travel Channel’s Adam Richman and Man vs. Food were kind of charming.

He even visited one of the temples of absurd foods near me.

Recently, I find gluttony a little difficult to watch.

Food designed to be wasted upsets me.

I can’t enjoy seeing creatures killed in a brutal manner slurped down without a thought.

In fact, the more I see the more revolting the whole spectacle becomes.

Food banks and soup kitchens can’t feed everyone who comes to them for help, so our bread and circuses have become one. Thus, it’s no surprise the Food Network has come up with its own salute to gluttony.

Last night, I developed a sudden fever so high I couldn’t control my legs. Fortunately, I was working at the family store, where a former housemate took one look at me, handed me a bag of menthol drops and stuck around to play a half-hour game of Point & Laugh. I’ve been in bed since Pete and I got home from work last night. So though I still can’t count how many fingers I’m holding up, I’ve got some time to blog, eh? Well, except that I keep falling asleep. It’s taken hours to write this inspiring paragraph.

One of my best friends from high school recently told me a story about us I didn’t remember. When we were teenagers, she told me she was allergic to eggs and had never eaten cake. I told her to come to my house and we’d fix that. Have I told you this story? If so, I’m sorry. Hey, maybe it’ll end differently, thanks to the NyQuil! Anyhow, she did come to my house and I mixed up a batch of chocolate chip cookie dough, leaving out the eggs. We got spoons and marched upstairs to my room. She sputtered, “Aren’t we going to bake this?” I said no, this was the good stuff. She was thrilled. Later, when she saw chocolate chip cookie dough ice cream in the grocery store she thought I was years ahead of ice cream makers. That’s great. I’ll take that: I’m a dessert prophet.

A few months ago, I preserved Apple Pie In A Jar and over the weekend, made a pie with it. With the addition of some preserved peaches and extra cinnamon, it’s pretty good. I predict you can make a few batches and have apple pie all winter long.

Drusy and I discuss the winter drapes.

Today is National Opt-Out Day, for whatever that’s worth. I’m opting out of receiving an unnecessary radiation bath, surrendering my Constitutional protections against unreasonable search and seizure and foreseeable sexual assault every day by not buying a plane ticket. Pete and I are planning a vacation, so: sorry, airline industry! No ticket money for you! But you won’t miss us, will you? If you did, procedures would probably change tout de suite. No, the police state has plans for us all, such that even I, public transportation’s fervent cheerleader, might find myself persuaded to buy another car someday.

I’m surprised to write those words, but there we are.

My friend Scout observed years ago that statistics indicated 1 in 4 women would be sexually assaulted in her lifetime, “but in my experience that number is reversed.” I agree: in conversation, when you explain what legally constitutes sexual assault, you can watch the terrible light dawn in women’s eyes. Suddenly they know an uncomfortable or traumatic memory is painful for a reason.

The American Cancer Society offers this set of numbers (.pdf):

Last night, Pete and I watched the episode of Modern Marvels called Failed Inventions, that included a segment about radiation and consumer products that were huge mistakes. We should expect to see backscatter scanners join this list of regrettable contraptions with a body count, but what will we say about people now expected by the United States government to endure sexual assault in the name of safety?

The idea born of bed-wetting cowardice, like so many in the last ten years, is monstrous. 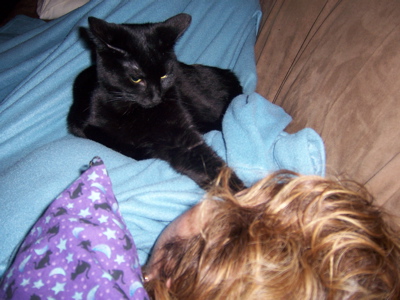 I've been under the weather. Drusy watches me sleep.

Sometimes a product tells you everything you need to know about its purchaser. This one, for instance, tells you people who buy it care so much about their temporary happiness that they give no thought to the garbage they leave behind for their and our children.

And by no thought, I mean ZERO. 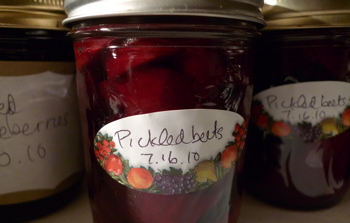 Tata: I would like to spend some part of our day in bed, discussing economics through finger puppets like normal people do.
Pete: Would you like some more coffee?
Tata: I would. What?
Pete: Normal people do not discuss economics with finger puppets.
Tata: You’re probably right. The puppets might’ve studied the humanities.
Pete: We could take a nap after we come back from the grocery store.
Tata: That’s a pleasant theory but we’re always too tired to sleep after all the label-reading and line-moshing.
Pete: What made you think of what normal people might do?
Tata: I don’t know. The finger puppets looked bored.

Recently, my friend’s ex-wife asked me to knit a baby blanket. The scenario: we had a falling out years ago that involved chocolate body paint and all the booze half a town could drink, but though we’re terrible human beings we’re both interested in do-goodery. She joined a group of knitters who turn out blankets for babies born in the hospitals in town and asked me to join her or donate baby blankets. I balked. Sure, a lot of babies born in the city’s hospitals have very little, but I disliked being unable to determine actual need; plus: I am a terrible knitter. I decided not to do it, but the request stayed with me. I wondered if women’s shelters would welcome this sort of gesture or if it would be counterproductive. Sometimes you can’t tell from the outside of a situation what would be helpful and what would be a disaster. As I was wondering this, a project at work asked us to create a holiday food drive, including presents for two families having a very tough year. Between these two families, there are three babies. With the friend’s ex-wife’s request still rankling my nerves, I had to admit to myself these were babies in need and I had no excuses. I bought yarn a few days ago and started knitting. The food drive ends on 1 December, so there will be time to knit exactly one blanket, but that’s also enough time to get over myself. I’m a terrible knitter and I’m freaking over it!

Panky and the disembodied hands of Buckwheat. 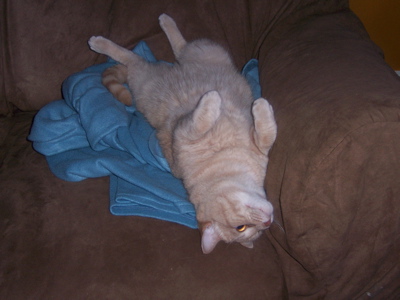 If I could wear this it would be the shiniest gown of my career in shiny.