For the past two weeks, we’ve been combing Craigslist for a tenant and hoped we’d finally found one. She seemed charmingly befuddled, geographically distant and linguistically tangled. We emailed back and forth, made detailed arrangements to receive her shipped possessions while she visits family in Finland and waited for some time to pass. She sent a picture of herself in which is appears young and supercute, which made me nervous because she can’t know I’m me and don’t care, but jealous types wouldn’t let a girl like that sleep one room from her huuuuuzbind. She also said a lot of things that didn’t make sense and each letter seemed to require a different Rosetta Stone. Last night, a giant check arrived, ostensibly to cover security, rent and shipping costs, but instead of things falling into place they flew everywhere and landed buttered-side down. A list of demands arrived, including that we cable money to a person in California, though no shipping company was named. My Spidey Sense, which had been tingling, went all 220 volt zot! zot! zot! 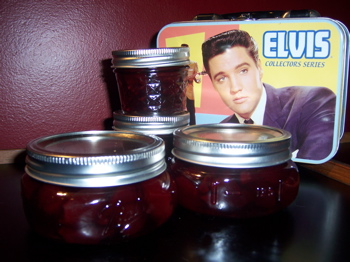 Cherries fit for the lunchbox King.

Last night, I made the mistake of trying to jar what was probably the final cherries of the season. Minstrel Boy gave me an off-the-cuff recipe for simple cherries spread. I pitted, halved and dropped them into a saucepan with sugar and the zest and juice of two lemons. Sort of. That’s sort of what he said. Anyway, this tenant stuff was suddenly very messy and the pan boiled over. In the jars, these cherries are a deep, rich, luscious merlot color, though they didn’t jell, which MB attributes to some sort of voodoo curse. Who cares, right? My kitchen smelled sweet and lemony and the cherries would taste great on a garbage can lid.

This morning, the supposed proprietor of the shipping company emailed me. His grasp of English grammar seemed tenuous, his demand for cabled money was suspicious, his email address could be made up in minutes, his company had no fixed address and his phone number went to a call center for the hearing impaired in Georgia. Tonight, I emailed the pleasantly befuddled young woman and said without a thorough explanation for all this, I’m mailing back the check tomorrow. Pete and I can’t have someone we can’t trust in our house and I can’t have someone near me playing weird games with money. It puts a permanent wave in my EEG. Tomorrow, we’ll see what she says, but I have a feeling by tomorrow night, I might be able to think again.

2 responses to “And You Were Right There”