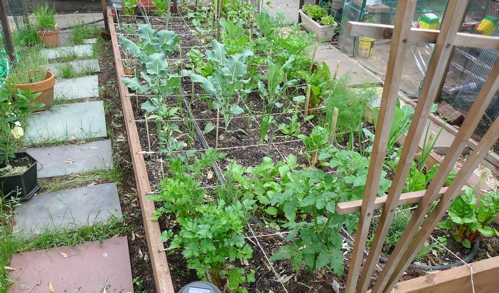 Win some, lose some, make pesto of some.

After more than a week of rain every day the garden looks lush and every plant grew tremendously. Even so: some seeds did not sprout at all; some beets have finally germinated. As I was weeding, I discovered two entire carrots had in fact sprouted so I spent the afternoon attempting to get over a grudge against them. The peas have become giant busybodies that can’t keep their fronds off their neighbors and the parsley’s showboating inspired a very delicious and refreshing salad. I cannot tell a lie: I trimmed that leaf lettuce to its stem for the second time and hope it doesn’t come back. It sounds crass to say the spinach and I have a date for six weeks after the lettuce bites the dust.

Radish jungle at the dining room window, a favorite of resident lovely cats.

Today, I planted two window boxes with two varieties of carrots in soil liberally laced with compost and vermiculite. Vermiculite is supposed to prevent soil compaction, so I’m optimistic the carrots will do better in a dedicated container. It’s working for these wise guys, right? Ever seen such smug radishes?

3 responses to “Every Mistake We Must Surely Be”