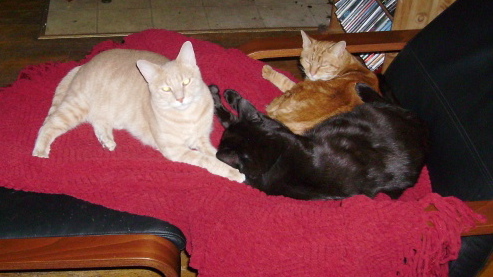 The pussycat on the left may look familiar. His name is Oliver.

Two years ago, Pete found a tiny ball of fleas with a little bit of cat inside them and brought all of them in. The bit of cat was taken in by Trout, who taught the wee thing to bathe, to climb, to use a litter box and to have a really great time no matter what. Then we found him a home with some very, very nice people we knew who had two cats and a Yorkie. At first, this seemed like a match made in Ho Ho Kus, but it turns out Ho Ho Kus might be Heaven after all. Oliver is handsome, isn’t he? 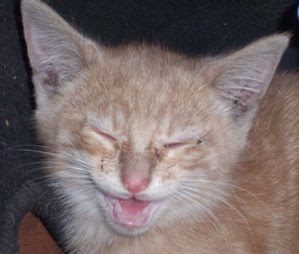 Oliver: tiny squeaking kitten as we found him in the backyard.

Well, let’s say he thrived on the attention at the house of the very, very nice people who are completely original in all things. On Wednesdays, a friend brings over her ferret to play with the Yorkie. The ferret taught Oliver that leaping and bounding ferrets do when they’re joyful, so Oliver leaps like a cat and bounds like a ferret. After two years, Sonya, the orange cat on the right, finally lets Oliver join her on the new throw blanket without a fight. I mean, it’s a throw blanket and it’s new. This is, like, Christmas-happy for cats. Pete and I couldn’t be happier for the very nice people and the happy cats.

Days ago, a friend of ours found two young calico cats abandoned in the basement of her Brooklyn apartment building. How would you feel about having and providing your own and someone else’s happily ever after?