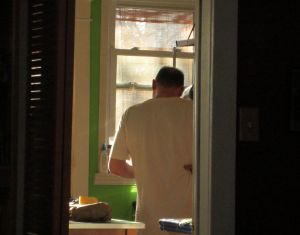 In January, I shot my mouth off in my doctor’s office by mentioning I’d had some sort of brain explosion and suddenly my doctor, who is amused by every breath I take, stopped laughing. I felt kind of dickish about that. Anyhoo, she told me she’d ditch her trainee and I should make an appointment come spring. What with the warm weather, I figured it was time to turn myself in. Yesterday, I had my doctor’s undivided attention for about an hour, which was a whole lot like having all searchlights find me at once, only with a charming European accent and excellent shoes. My doctor is a damn fascinating person. You may remember me whining that I used to be Me, now I’m me and have little idea what happened in between. Starting tomorrow, we’re going to try to find out. This brought up lots of issues I had pushed to the back of my mind, including who I was and what I think now of the artwork I was doing then. And then, Adrienne Rich died. I feel speechless about that because one of the last things I did as Me was to exceed my time limit at a huge, prestigious academic poetry reading for which I was the opening act and Adrienne Rich was the feature. It was a bridge-burning move of Golden Gate proportions in which I put on a good, visceral show and never did it again. In the bargain, I lost the protection of another famous woman artist I had grown to love. I never wrote another poem. Then my brain cut me off.

In another life, maybe Adrienne Rich and I would have been friends now. Maybe.

This morning, my friend Robert sent me a different obituary for Adrienne Rich, leading us to conclude that Robert’s life broke in half at just about the same time mine did. I remember being the engine that pushed an art scene, a comedy troupe, an underground life for dozens of people too fired up to stay home at night, but it’s a distant memory now. In it, I look like Annie Sullivan in Danskin capris. As the day wore on, I felt a sense of my place in things firming up. Finally, as I was sitting in my cousin Carmello’s hair salon, I heard this on the CD player and just about sat up straight at the shampoo sink.

In the early nineties, when I was burning a swath across the landscape, I sat at my Mac at nights, listening to music in languages I didn’t speak and writing my next performance poems. Blue Bell Knoll was one of my favorite albums for this kind of work. It possesses a certain emotional plasticity that lets the mind wander and the characters flow. I wrote some of my best work listening to this album and haven’t listened to it since. In the salon today, it seemed like the Universe was shouting my name. Carmello reminded me today wasn’t the first time that’d happened in his shop.

Okay, I hear it. But why? What is there to know?

One response to “A Magnet And I Am”