With great fanfare, the government announced recently that the 1940 census was online and searchable in its entirety, except that it wasn’t and isn’t. Two states are completely online. Rumor has it one of them is Delaware, which almost doesn’t count unless the other one is Rhode Island. I tried searching New Jersey and found only census maps that told me nothing I didn’t know because I can see New Brunswick from, well, New Brunswick’s backyard.

While I was clicking on links that went nowhere, I accidentally clicked on one that did go somewhere. The National Archive was offering some version of 1940 alien files, so I searched a very rare family name on my father’s side and got a hit. I almost fell out of my chair when it turned out the National Archive in Kansas City had some papers related to my great-grandmother. The website asked for an email with a long list of specific numbers, my relationship to the person and what exactly I wanted. Also, the public could stop by and copy these documents for itself, which seemed downright homey. I asked for copies, gave the archivist a credit card number and a couple of days ago, these documents arrived. 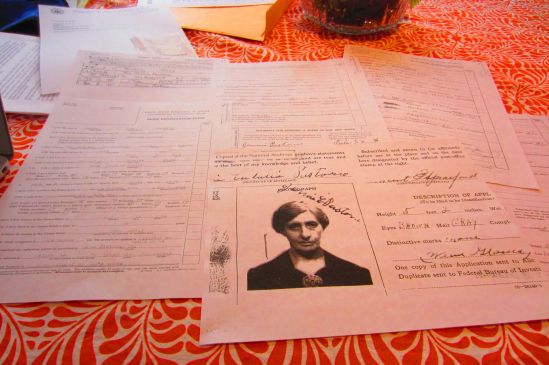 When filling out forms your great-grandchildren will see copies of seventy years later, please write in heavier ink.

In 2011, I put up on Facebook a picture of my father as a small boy sitting on a dock with a woman I didn’t recognize. I’d found the picture in a box and scanned it. That woman was lush and curvy and had an intricate hairdo piled high on her head. My cousin’s mother looked at that photograph and said it was this woman, whom we’ve always called Nonna. She died, as I recollect it, just about the time my sister Daria was born. The story I heard was that she was on a bus, it stopped short and she hit her head, which may or may not be malarkey. Since I have no memories of her, the picture you see on the table is the one that’s always been in my head: slim, severe, critical, unhappy. But since I have no other pictures of her, when did I see this one? And why is it so different from the one on Facebook? Are the two pictures even of the same person?

I’d like to be able to get back to the page where I found the alien file search, but I haven’t been able to find it. If you figure it out, clue me in. I have lots more Italian relatives to search for.

One response to “All Your Letters In the Sand”