Money can’t buy happiness, but it can buy sixteen pounds of rhubarb.

Via Angry Black Lady Chronicles, get a load of this shit:

House Republicans prohibited state Rep. Lisa Brown from speaking on the floor Thursday after she ended a speech Wednesday against a bill restricting abortions by referencing her female anatomy.

Brown, a West Bloomfield Democrat and mother of three, said a package of abortion regulation bills would violate her Jewish religious beliefs and that abortions be be allowed in cases where it is required to save the life of the mother.

“Finally, Mr. Speaker, I’m flattered that you’re all so interested in my vagina, but ‘no’ means ‘no,'” Brown said Wednesday.

Brown’s comment prompted a rebuke Thursday by House Republicans, who wouldn’t allow her to voice her opinion on a school employee retirement bill.

“What she said was offensive,” said Rep. Mike Callton, R-Nashville. “It was so offensive, I don’t even want to say it in front of women. I would not say that in mixed company.”

“If I can’t say the word vagina, why are we legislating vaginas?” Brown asked Thursday at a hastily called Capitol press conference. “What language should I use?”

As you may be, so I was inspired to dash off a letter.

Women have vaginas. We talk about them. We use them to start families and for fun. Having a vagina can be fully awesome.

If you think they’re icky or unmentionable, you certainly shouldn’t get to regulate vaginas. That’s ridiculous. In fact, if you look at internet, you are the subject of fantastically funny ridicule, which is delightful. Laughing at men who can’t bear to think of vaginas is great sport. But no, you absolutely have no business going near a vagina.

Seriously, stay away from vaginas if you’re that squicked out. No vagina for you!

I considered paraphrasing Caesar, but that gooey Latin verb joke would just puzzle the guy having trouble with nouns. But not you. And you know what to do.

A kind of drusy you can buy.

After work today, I was unpacking my bookbag while Pete and Drusy looked on. Slowly, he said, “Which of the little black cats is that?”

“It’s Drusy,” I said, annoyed that he didn’t recognize the tiny cat that often sleeps on his chest. “Of course.”

He scratched her neck.

“Where,” he asked her, “is your little necklace?” Panicked, I searched the house and didn’t find it. Did she decide to change her jewelry when it clashed with her summer fur? Did she get caught on something and the collar snapped open? Did she and her sister tussle over whose Justin Bieber posters would decorate the door? Did Drusy and Alexis Carrington ruin their designer outfits after a fight that ended in a pool? We don’t know and the cats aren’t telling.

I’m a Pushy Zelda about adding fruit to every meal. Ordinary oatmeal becomes elegant with the addition of spiced apple. Your grilled cheese is junk food until you add sliced peach, avocado or tomato. Pork chops or chicken will thank you for cranberry compote or mango chutney. Eat some fruit!

“All right, Zel, geez! I’ve got fruit on every surface in my kitchen, but what do I do about the fruit that’s getting away from me?” Ah! You need a sturdy fruit bread recipe you can stuff with starting-to-turn stuff. The Joy of Cooking’s banana bread recipe is a good place to start, but exchange whole wheat for the white flour and add spices like cinnamon, ginger, cardamom and basil. If you do not have the Joy of, you have the good fortune to be sitting at the world’s largest encyclopedia of recipes and a great many savants offer their say-so most sagacious. In other words: look it up. You will find something you like. 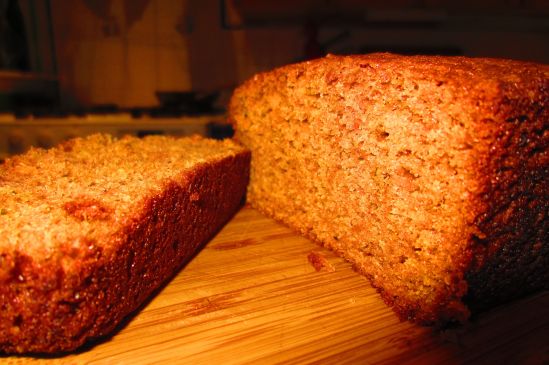 Strawberry bread gives you the eye.

An hour and a half ago, fruit was your frenemy. Now fruit bread is your friend.

Pete, soaking wet, ran past me in the living room, shouting, “Mrppzk bvtup show you something” over his shoulder. That seemed unusual. I donned my Flipflops Of Backyard Investigation and followed him, but not fast enough because from the back porch, Pete groused, “Now! Now! Hurry!”

He was pointing at the corner of the garage, where a rain barrel Pete had set up only hours before was overflowing after a sudden mini monsoon. It was still raining as I grabbed my camera and ran outside. When I cam back in, I was dry and Pete was still soaked.

Tata: So. Why are you wet and where did you go?
Pete: The downspout clogged.
Tata: I’m stumped.
Pete: The downspout clogged so I got up on a ladder and pushed a stick through it.
Tata: You got up on an aluminum ladder at the end of a lightning storm and now our rain barrel is overflowing.
Pete: Yeah, all that water was just sitting on top of the garage.
Tata: Is it too soon in this story for me to panic and fix a martini? 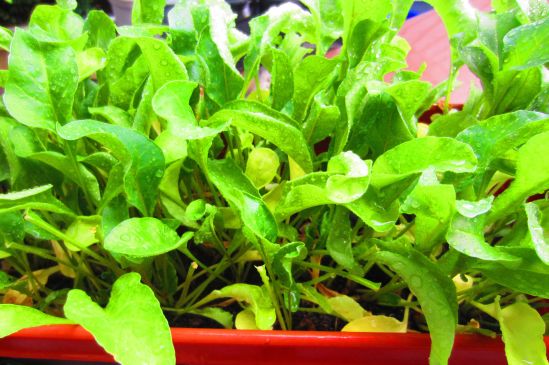 Yes, but not for long. 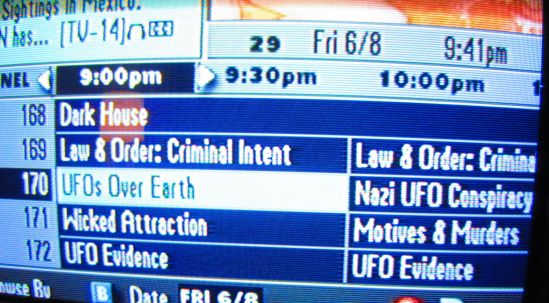 That is the fucking Science Channel. Below, with the equally and effusively stupid programming is the brand new channel called Destination America, replacing the perplexing Planet Green, which ran barbecue competition shows. In other news: this week, I ran into Facebook “feminists” engaged in slut-shaming – which they did not know.

Through a combination of simple events and dumb circumstances, I have been coming into both itching and burning contact with vocal stupid people and spent a few weeks verbally shooting them full of holes. That takes a lot of time and energy and stirs up the kinds of emotions I have been trying to live without. This wasn’t doing Pete’s blood pressure any favors and I felt like anger was starting to lead me around by the nose again. Moreover, I started the week with a stiff neck, causing me to move like an exotic bird for days and on Friday pulled a muscle in my back. I stayed home and had a talk with me.

Tata: Say, what are you doing?
Tata: I have to defend myself. Stupid people are stupid and say stupid things. I have to tell them they’re stupid!
Tata: Why?
Tata: Because…I’m mad! That’s why!
Tata: Yeah. Are they going to get less stupid because you’ve informed them that they’re stupid?
Tata: No. I’m being stupid, aren’t I?
Tata: Yup.

The neighbor directly behind us is a smart guy. We agree on lots of things and he has that chicken coop I cannot quit staring at, he also has a wife who has never had a conversation with me. For no reason I can imagine, she feels entitled to insult me. She’s done it three times. Last week, I was contemplating my revenge options when I realized my next move might result in some very ugly outcomes.

I thought about it carefully. I thought about what you might do, you Poor Impulsives. I am completely confident in my ability to blow up our block in ten words or less, not to mention anything else.

So I removed myself from the company of the stupid people and spent the afternoon letting myself let the anger drain. It’s not easy. That drain clogs often and is full of hair you don’t recognize.

When somehow I was neither under rubble nor under arrest, I consulted with my friend Minstrel.

Okay, you and I are trudging across a desert under a blazing sun. Salt crusts our blistered lips. It’s plain I’m holding you back and you’d stand a better chance of survival alone. Vultures are landing nearby, clutching bottles of ketchup and A-1 in their talons.

Tata: Go on without me, but make me one promise?
You: What is it?
Tata: You’ll track down that bastard who did Playground In My Mind and feed him his still beating heart…?
You: I’ll…remember you for – well – most of next week. Probably.

At least, I can write jokes again. There’s a council meeting coming up and by this time tomorrow night, anything could happen. I might be speaking in tongues and knitting up a guillotine. Every movement needs its wild eyed DeFarge; fortunately, my neighbors think I’m quirky and have no idea they don’t know me. 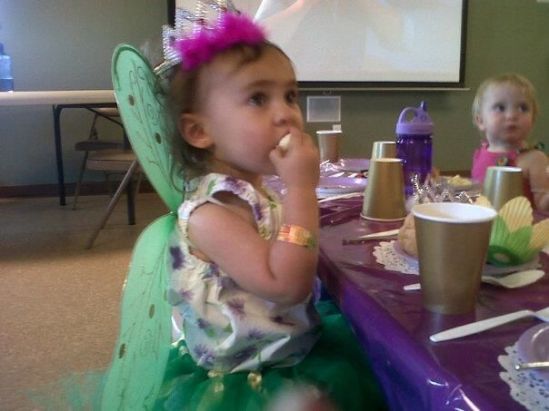 Today is Buckwheat’s second birthday, celebrated in Colorado. I would have worn my tutu, but I was turning over the compost heap and I was afraid of catching the pitchfork.