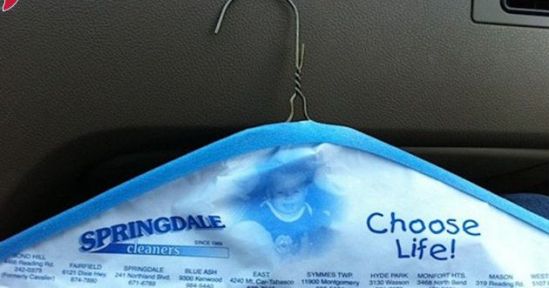 A load of this shit, you must get it.

From the HuffPo cite above:

“I think it’s the perfect place to advertise a pro-life message,” Springdale Cleaners owner Paul Dehler told HuffPost. The 66-year-old said he printed the images on the hangers to support his sister, who’s opposed to women’s right to choose an abortion.

“I don’t get into all that,” Dehler said of the abortion debate. “I’m just putting the message out there, and doing it for my sister.”

Pro-choice advocates in the U.S. have historically used coat hangers as symbols to illustrate the dangers of outlawing abortions, suggesting that women would use such rudimentary tools to end pregnancies if the state barred medical personnel from performing abortions. But Dehler, who has run Springdale since it opened in 1969, said his hangers are aimed at promoting a pro-life stance.

Springdale Cleaners first started producing its pro-life hangers six years ago, when Dehler’s granddaughter was an infant, he explained. “Some customers have said they don’t like the hangers, and in some cases I’ve lost their business,” Dehler said. “But I’d like to think that I’ve gained more customers with these hangers than I’ve lost.”

That cites a New York Times article you should read in its unforgiving entirety written by a retired gynecologist, but this is salient:

My early formal training in my specialty was spent in New York City, from 1948 to 1953, in two of the city’s large municipal hospitals.

There I saw and treated almost every complication of illegal abortion that one could conjure, done either by the patient herself or by an abortionist — often unknowing, unskilled and probably uncaring. Yet the patient never told us who did the work, or where and under what conditions it was performed. She was in dire need of our help to complete the process or, as frequently was the case, to correct what damage might have been done.

The patient also did not explain why she had attempted the abortion, and we did not ask. This was a decision she made for herself, and the reasons were hers alone. Yet this much was clear: The woman had put herself at total risk, and literally did not know whether she would live or die.

This, too, was clear: Her desperate need to terminate a pregnancy was the driving force behind the selection of any method available.

The familiar symbol of illegal abortion is the infamous “coat hanger” — which may be the symbol, but is in no way a myth. In my years in New York, several women arrived with a hanger still in place. Whoever put it in — perhaps the patient herself — found it trapped in the cervix and could not remove it. 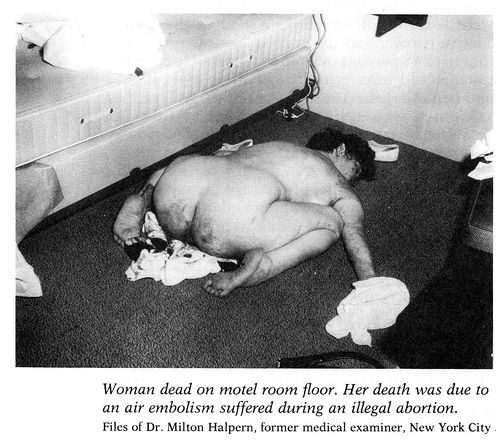 Gerri Santoro was a real woman with real problems and no way out.

Paul Dehler is a stupid man who should keep his opinions about ladybusiness to himself.