Pete dropped my camera. We’ve been pawing it like puzzled sloths, trying to get it to work again. I was starting to think I might have to break down and – ya know – write something. That sounds a lot like work; fortunately, this happened.

Cat blankets from the stealth knitters! Just in time, as the last batch are almost gone, except for a couple of hardy ones that for some reason didn’t get cat-kneaded into non-existence. The cats, especially those who end up spending time in a cage, love these. And adopters love them as well. When we send one home with them and let them know that people actually knit them for the cat or kitten they adopted, they get a real understanding that animal rescue is a community affair.

With five adoptables in the house, certainly we first had to check them out with the cats who were sunning on the porch. Seven and Patter gave them a once over. Seven apparently believes they make better toys than beds.

In the cat facility, Fluffy gives the blankets a snuggle test. Apparently he approves:

Thank you! Thank you! It’s so wonderful to know you are thinking of us! 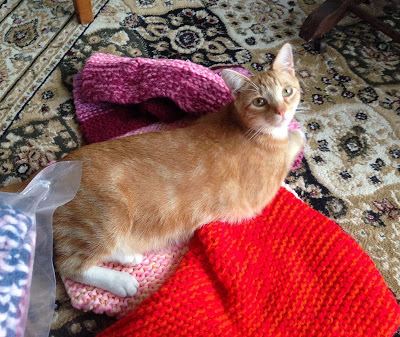 And now everyone is happier.

4 responses to “Live Without Me No More”