Let’s start this story at the beginning. Grandpa died. After that, it gets funnier.

I made the mistake of asking my mother how I could help, mostly because no one is used to my attempting to be nice, and my mother was confused enough to believe I meant it. She asked me to write an obituary. She seemed to forget about it until half an hour before I left work on Friday, when she called me at the library and demanded I churn one out for Saturday’s Cape Cod Times. Newspapers are not my thing, but I was pretty sure that was impossible. The paper’s website coyly kept secrets like what was required when to itself, but one thing was crystal clear: the paper charged a metric assload for obituaries, then charged online readers to read them. Suddenly I understood who I was dealing with and why. Before I left work, I sketched out a basic summary of my grandfather’s life from pages of notes Mom sent me, then I drove twelve whole minutes home and parked my car. When I got to the living room, Pete handed me the phone. Mom had just hung up with Emil at the funeral home and she wanted me to send my draft to Emil now, though I should call him first. So I called Emil, who agreed he’d read it in the morning. While Emil and I were talking, Mom called again. No, the top of my skull did not pop off, but I did tell her I would finish my draft, mail it and quit working for the evening. It happened to be Pete’s birthday and I was going to shut off my phones and make dinner for my very, very patient husband.

Emil sent back my draft with one minor correction. On Sunday, I sent the corrected draft and went about my business. Remember that bathing suit shopping? Yes, my phone rang twice and I didn’t hear it. That part is completely my fault. Also, this happened:

On Monday morning, I discovered an ominous email from the newspaper and that Grandpa’s obituary was not online. I pictured myself explaining to my nearly hysterical mother that her father’s obituary was not in Monday’s paper and I panicked. The office hours started at 8:30. At 8:31, no one picked up the phone. At 9:01, no one answered the phone. I responded to the email that insisted I had not met unstated criteria: the address of the funeral home and my address. The address of the funeral home was in the obituary. My address? What the fuck did the Cape Cod Times need my address for? I sent a withering response and waited.

And waited. Finally, we exchanged a few more emails filled with tasty adjectives and credit card information. I never actually swore at the woman. No, really. Instead, I called the funeral home.

Tata: Hey Emil. It’s Domenica LongItalianLastName. Do you have any close relatives who work for the Cape Cod Times?
Emil: No.
Tata: Any close friends? Distant cousins? Unwashed brothers-in-law?
Emil: No. Why?
Tata: You’re sure?
Emil: I’m sure!
Tata: Good, because they are VERY BAD PEOPLE. I am preparing to curse their ancestors.
Emil: What happened?

I told the briefest possible version of this story.

Later, it turned out this conversation earned me the Mourner of the Year Award and my mother’s perplexed approval. I didn’t see that coming.

When I knew for sure the charge would clear and the obituary would print, I worked up maximum nerve, called Mom and confessed.

Tata: …and it’ll run tomorrow.
Mom: That’s okay. Everyone on the Cape already knows.
Tata: Fine, but I’m not un-cursing any ancestors. 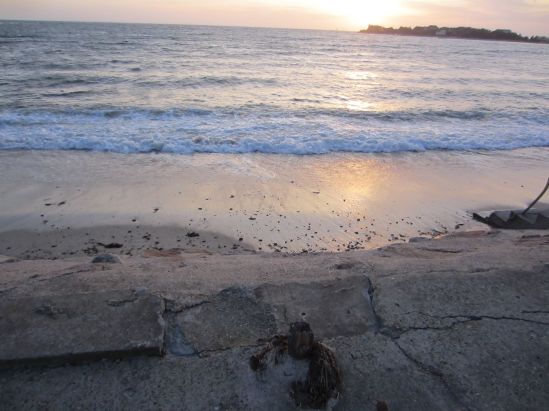 When it was all said and done, the obituary was simple and faithful to the stories Grandpa told and Mom had the foresight to write down. If I’d had more time, maybe it would be different, but I can’t say it would be better.

HYANNIS — Austin Nickerson Walker, 99, of Hyannis, on February 27, 2012. He was born August 12, 1912, to parents Austin A. and Agnes Gardner Walker on a family farm on Mary Dunn Road and graduated Barnstable High School.

He married the late Gladys Holway in 1938; they welcomed a daughter in 1940. Austin enlisted in the Navy in 1943, serving with the Seabees in the Aleutian Islands and on Okinawa during the war, in the reserves for five years and on active duty in North Africa during the Korean War; he also sailed with the Massachusetts Maritime Academy.

In civilian life, Austin worked for Hood Milk Company, Corcoran Plumbing and Heating Supply Company and in hotel construction and maintenance for over thirty years. He had been the sole surviving charter member of the VFW Post 2578.

Austin and his brother Edwin, deceased, were avid lifelong fishermen and enjoyed clamming and quahogging. Austin loved flying and traveling, but he was a true Cape Codder with an incredible memory for people and places. He found something in common with everyone and always had a joke at the ready.

No one ever called him Austin. Everyone who didn’t call him Dad or Grandpa called him Ozzy. My favorite photograph of him was one Dad took when my brother Todd was about three or four, so about 1970. We were fishing for sunnies at Mary Dunn’s Pond when Todd’s attempt at casting went awry. Dad took a picture from an elegant distance of a patient grandfather carefully prying a fishing hook from the back of a little boy’s shorts. I wish life had treated him better. He was a genuinely lovely person.

3 responses to “Happen To See the Most Beautiful”