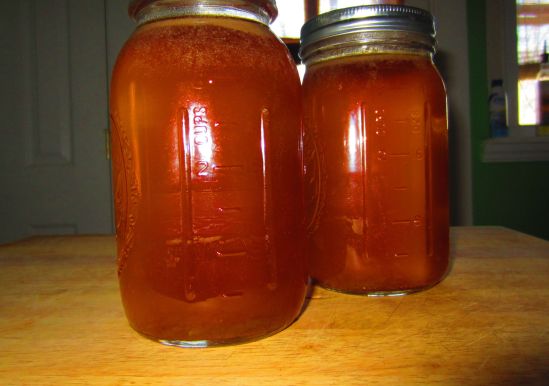 Pro: turkey stock, golden and translucent, fragrant and familiar, a joy. Con: tedious skimming and repetitive straining is enough of neither.

As a direct result of watching America’s Test Kitchen last night, my husband is making homemade tater tots right now and they are DELICIOUS. Is a tote bag in my future? 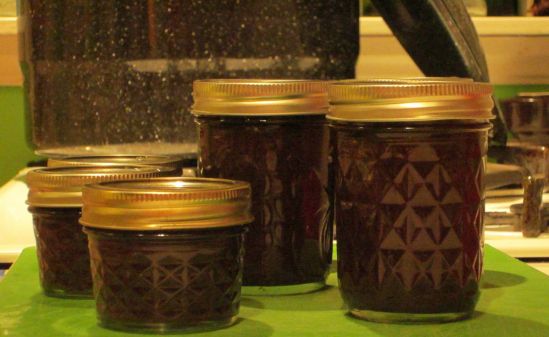 This cooked down for several days, which was much too long. The apple butter and I will be on speaking terms again when I open one of these jars in the dead of winter and all is forgiven.

Late in my tomato jarring season, one of WellPreserved’s posts caught my eye.

After jarring every batch of tomatoes and sauce, I found myself looking anxiously at the mountains of leftover material. It should be useful for something, I thought, but didn’t know what until the post: tomato powder. The concept was immediately graspable.

We will store them in large chunks (this will preserve their flavor) in a mason jar with a lid on it (not sealed) and make small batches into powder by quickly freezing it and then blitzing it in a blender of spice grinder.

Dehydrating was simple – we spread out the ingredients (roughly) in the dehydrator and placed it on 125 degrees farenheit for 24 hours. They are complete when they are frail and crunchy.

The primary use of our powder will be an additive to sauce. Dry food acts like a sponge and soaks up the most viscous liquid. In essence, this powder will function like a dehydrated tomato paste.

But sauce alone isn’t going to consume this huge amount of skin. Here’s other uses for tomato powder:

Perfect. I saved up skins and seeds, laid them out carefully in the dehydrator for 24 hours and stored the product in the freezer. Today, I was setting up an oxtail stew and remembered the frozen dehydrated tomato material and ran it through a spice grinder. About a quarter cup of tomato powder lends really nice flavor to broth. 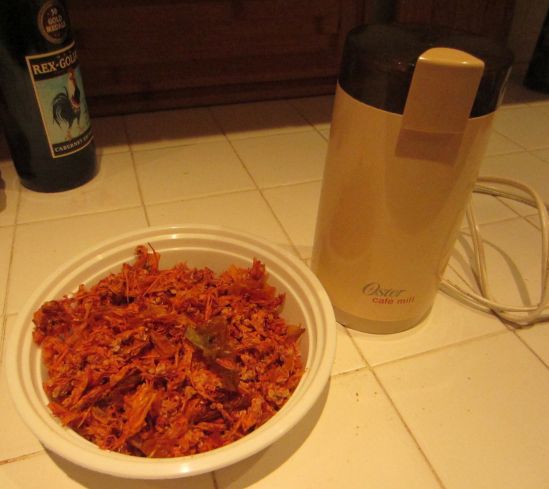 I only regret that I was born delicious.

Fantastic stuff! Wish I’d known about it years ago, but at least I know now.

During dinner, Sweetpea stared Pete in the eye and tossed her head toward the porch. Pete stood up, opened the door and let in Mom and Tom. Apparently, Pete speaks cat. 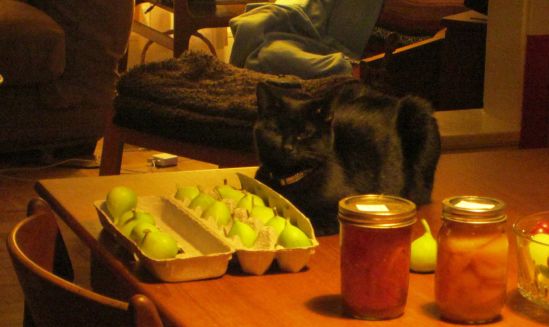 Mom and Tom brought figs from their fig tree. Drusy promptly claimed them for her own.

On a clear day, you can see goddamn Coney Island.

The tourists are gone, which means tourists like us arrived at Sandy Hook this weekend. I’ve been waiting for this weekend since it turned cold last winter. Pete and I drove down to the park, rode like Jehu to this snack bar/rest stop/unprotected beach and sat on the roof for small snacks and lots of fluids. I was actually as happy as I have ever been in my entire life. If someone calls you on the phone and says, “For $10,000, Jed, do cream cheese, dried cherries and fresh basil make a good sandwich?” Well then. You say yes.

I never shut up when I succeed, but sometimes I fail fabulously as well. Let’s dig in, shall we?

A friend asked if I could teach her to make yogurt, the trick being that she lives now as a vegan. I took this as a challenge, like when I’ve had to fight my way out of a restroom or read my site stats here on cryptic WordPress. To the grocery store, then, away!

It’s important to remember we’re in the experimental stage and don’t want to spend A MILLION DOLLARS on failed recipes. Let’s fail cheap! Recipes for coconut yogurt use tapioca starch or gelatin. Gelatin is not vegan, so that’s out. I happened to have liquid pectin in the cheater envelopes because I’m a desperate woman. So I went with what I had.

I started reading about the process of making coconut yogurt with limited infodata but with the certainty that no method I could come up with would kill anyone. That inspires confidence. 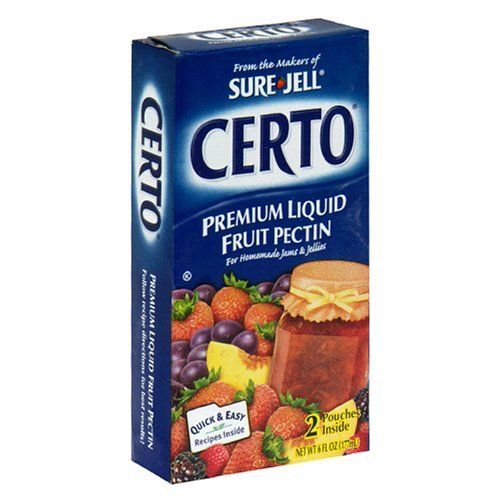 So I heated coconut milk and coconut cream and added an envelope of liquid pectin. My kitchen thermometer is trying to die, but I don’t let that stop me. No, I stir constantly and the temp rises faster than I expect because the coconut starts at room temperature and my kitchen is not air conditioned. The spoon tells me when the pectin likes the temperature and begins thickening. I let the temperature go to just above 170 and turned off the heat. Unlike animal milks, coconut milk doesn’t form a skin when the scientist doesn’t stir, but cooling occurs more quickly when stirring breaks surface tension. I stirred some and let it go some, and when the mixture cooled to 110, I added the yogurt starter and popped the bowl into my yogurt heating contraption, which is an old metal roasting pan lined with dinner napkins and resting on a heating pad set on medium. Twelve hours passed. In the morning, I was sad to see the mixture appeared not at all thick. I put it in the fridge and forgot about it.

This evening, a funny thing happened: Pete tasted the coconut mixture and mentioned the crazy flavor.

I suggested raspberries. Pete said no. I said grilled pineapple. Pete said maybe. As I watched Pete out the coconut mixture into the ice cream machine, I realized the coconut cream didn’t belong there and the texture without it was probably pretty good. Pete added Amaretto di Saronno and brought me a taste. I almost could not believe my mouth. It was unbelievable, even for my mouth. 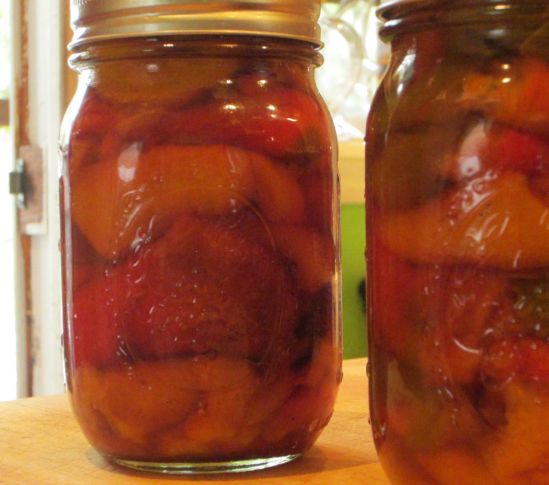 Heirloom tomatoes, purple peppers in sherry vinegar, the sinister red peppers. These guys don’t really speak to each other. I mean, I’m guessing.